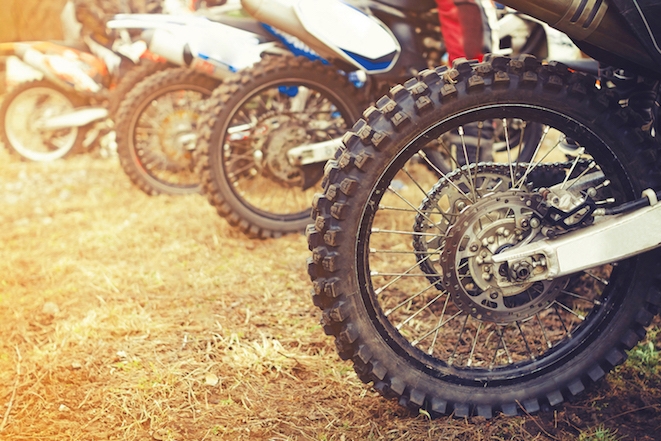 Originally, the dirt bike racing evolved from motorcycle trial competitions at the beginning of the last century - races that were known as “scrabbles”. The first recorded scrabble race took place at Camberley, Surrey in 1924. In the early years of the sport, the motorbikes used were essentially the same as the road bikes. However, as early as the 1930s, bikes started to be adapted for off-road use with the introduction of suspensions and the swinging fork suspension in the 1950s.

Over the next decade the sport of motocross had its first European Championship, followed shortly afterwards by a World Championship. In the mid-1960s motocross was introduced in the United States and a decade later Japanese motorcycle manufacturers started producing affordable purpose-built off-road bikes leading to a boom in motocross.

Today, motocross is a thriving sport with several popular derivatives including Super-Moto, Supercross and Mini motocross.

Things to Consider When Getting Started

Before advancing onto a dirt bike, it is often suggested that beginners start their journey by going out on a BMX or mountain bike to get used to riding on dirt.

You will, however, need your own dirt bike to go racing and it is perhaps a good idea to buy second hand initially. Dirt bikes are made lightweight and are intended for riding off road. The majority of designs include rugged tyres and suspensions and are manufactured for riding cross-country with its rough terrains like dirt, mud and rocks. Dirt bikes come with either two-stroke or four-stroke engines and motocross bikes are specifically designed for racing in closed-course competition. They come with single-cylinder engines that help give fast speeds and the suspension has to be able to handle the jumps and the rapid acceleration required on a motocross track.

Dirt bikes usually have long, flat seats allowing the rider to shift their weight quickly to give extra traction around corners. Riders in motocross races usually stand for much of a race so comfort is not a priority in a dirt bike's design. Dirt bikes, like all other motorbikes, are measured in cc's (cubic centimetres), which refers to the size of their engine and the more cc's an engine has, generally the stronger the bike will be.

If you are buying a bike for a new rider who is less than 5 feet tall and 10 years of age, you should look to buy a dirt bike under the 110cc range. Options can include three-speed transmissions and automatic clutches to help the inexperienced rider get used to riding on two wheels before having to learn the clutch system.

An adult first-time rider should, however, look to get something more appropriately sized, but nevertheless, under 250cc while you get used to the feel of a dirt bike. Furthermore, if you're 15yrs or older, you need to get used to the clutch system if it's your first bike. However, if you're already familiar with this, then size should be your next priority.

Size matters both in terms of your overall safety and for your comfort on the dirt bike. The best way to know if a dirt bike fits you is to get on the bike and sitting forward see if your feet touch the ground. You should be able to put one-third of your foot on the ground, avoiding being flat footed or unbalanced on your tiptoes. If you encounter a big bump you want to be able to control the bike if you have to put your feet down.

As well as a bike you need to equip yourself for motocross. The basic equipment is a helmet, chest protector, gloves and boots. In addition, a neck roll is a good idea and is relatively cheap. You will also need goggles when you are out on the track, as riders in front of you will kick up mud or dirt which can be dangerous if it hits you in the face. Plastic tear-off strips are another good item to have. Tear-offs are thin strips of plastic that cover the lens of the goggles preventing it from becoming muddy, scratched, or just too dirty to see through. The rider can simply reach up and tear one off for a clean view. We also recommend an engine kill cord to stop the engine should you become unseated or thrown off.

There are over three hundred tracks around the UK and a simple search on the web will identify those nearest to you.

Motocross tracks are especially designed with ramps and turns and around thirty riders take part in each race. The races involve riding around the course for a fixed number of laps with the rider crossing the finish line first being declared the winner. Championship events have races in a heats format, in which the top riders qualify for the next round, until a final group of qualifiers take part in a final race.

Once you have started dirt biking it is important to maintain your bike to get the best out of the sport. Here is a list of basic maintenance activities to carry out after each ride.

For advice on the best cables and braided brake lines for your dirt bike, simply get in touch with us here at Venhill. Our expert team can help you find the best equipment and gear for your bike so you can make the most out of it. We offer a wide range of cables and hoses in a variety of colour options enabling you to customise your dirt bike’s appearance to exactly how you desire.

Get in touch today.