Brake Fluid Ratings 2019 – Everything You Need to Know 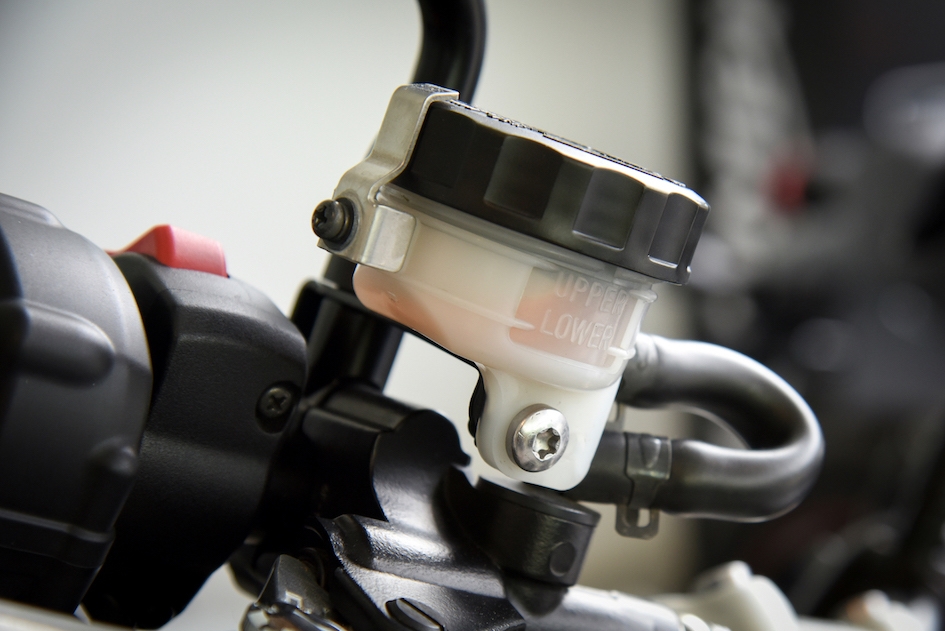 When you are riding at speed you want to be sure that your brakes aren’t going to let you down and that a braking failure isn’t the penultimate experience of your life.

An essential part of a motorbike’s braking system is the brake fluid, but many bikers are unsure of how it works and the importance of using the correct brake fluid for their bike. A lack of knowledge of brake fluids could have catastrophic results for a rider, so here we set out the information that every biker should know.

Brake fluid, which is a hydraulic fluid, is responsible for moving the components of your bike’s braking system. Without this fluid, which operates under both high temperature and high pressure, your bike would not be able to stop when you brake. The pressure of the brake fluid causes the brake pads to squeeze down on the disc, which slows and eventually stops the wheel rotating.

The early brake fluids contained castor oil-based hydraulic fluids and alcohols such as butanol and ethanol. These fluids were used before brake fluid regulations were established, and it is the DOT 2 standard that provides for these oil-based brake fluid.

The DOT by which different types of brake fluid are identified comes from The US Department of Transportation (DoT) that classifies brake fluid.

There are three essential measures used to set a fluid’s final DOT rating that consumers should be aware of:

Your brake fluid’s ability (or lack of ability) to resist heat damage and moisture has a significant impact on its performance, and consequently on the performance of your bike’s braking system.

The DOT number of a brake fluid will give you an idea of how the fluid will perform at the high temperatures generated by constant hard braking or in the most extreme climatic temperatures.

For most motorbike use, it is only DOT 4 and DOT 5.1 that you need to concern yourself with, and it is likely that it will be one of these fluids that is recommended for your motorcycle.

As DOT 5.1 is more hygroscopic than DOT 4 and therefore absorbs more moisture, it will need to be changed more often. However, the benefit of 5.1 with its higher boiling point, is that it can experience higher temperatures than DOT 4 before it starts to affect braking efficiency. Although, a good quality DOT 4 fluid such as the Super DOT4 which has a dry boiling point which exceeds the 5.1 minimum will be able to contend with the temperature levels it would experience on a track day, for example. The Super DOT4, like the DOT 5.1 will need to be changed more often than DOT4 with the obvious budget implications.

DOT 5.1 maintains a lower viscosity in lower temperatures than DOT 4 all the way down to around -40 degrees C, although this is unlikely to be relevant in the UK. For this reason, DOT4 is often an appropriate choice of brake fluid and requires changing less often.

DOT 5 brake fluid is not hygroscopic and therefore does not have to be replaced due to the increasing water content. As a rule, silicone fluid should be used only to fill systems that have not been previously filled with glycol-based fluid. A system that has used glycol-based fluid (DOT 3/4/5.1) will inevitably contain moisture and glycol fluid disperses this moisture throughout the system and contains corrosion inhibitors. Silicone fluid on the other hand does not allow moisture to enter the system, but also does not disperse any that is already in the system either. A system that has been filled from dry with DOT 5 silicone fluid does not require the fluid to be changed at regular intervals, but only when the system has been disturbed by a component repair or renewal. Silicone fluid usage is highest in cold climates due to its viscosity performance.

Brake fluids that have different DOT ratings cannot always be mixed. DOT 5, for example, should never be mixed with the glycol ether constituent of DOT 3, 4 and 5.1 as the combination with a silicone fluid may cause corrosion due to trapped moisture. DOT 2 should never be mixed with any of the other brake fluids. As DOT 3, DOT 4, and DOT 5.1 are all based on glycol esters they can be mixed. However, the motorbike manufacturer will state which brake fluid to use in the manual and while it is possible to move up to a higher performing brake fluid i.e. from DOT 4 to 5.1, you should never move down from the manufacturer’s recommendation. A lot of fluid manufacturers recommend against mixing brands and DOT classifications because some chemicals might not be compatible. It is advisable that before you add any brake fluid, that you check any stickers or warnings on your bike for additional information

Another tip when changing your brake fluid is that you should always use new fluid from an unopened bottle in order that you can be sure it won't be contaminated with water. Also remember that glycol ether-based brake fluid will damage the paintwork of your bike if it comes into contact. DOT-5, as it is silicone based, won't damage paint, although if it is spilt onto the paintwork, touching-up or repair of the paint can be complicated. DOT 5 was used by Harley-Davidson until all their bikes had ABS brakes fitted at which point, they specified DOT 4, the standard brake fluid today.

The key thing to remember about brake fluid is that it deteriorates over time, generally as a result of moisture absorption. For this reason, it is essential that you change your brake fluid before it deteriorates to a point when it compromises the performance of the brake system and threatens your life.

To get the most out of your brakes and motorcycle in general, browse our range of braided brake lines here at Venhill along with all our other products.